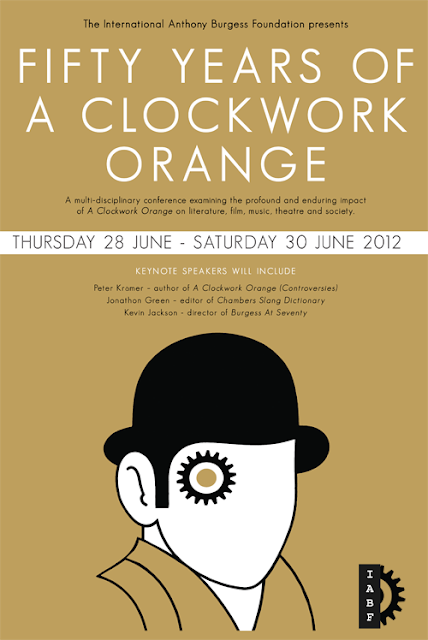 What's it going to be then, eh? A Clockwork Orange is 50. Join us for three horrorshow days of talks, lectures, debates, music and films, 28-30 June

Full conference tickets are £70. Concessions are £40 and day tickets are £25: please contact us directly on info@anthonyburgess.org or 0161 235 0776 to purchase these, or ask us anything about the arrangements.

This acclaimed and wonderfully unusual documentary looks at the cultural and historical contexts and philosophy underpinning A Clockwork Orange, featuring new archive material of both Stanley Kubrick and Anthony Burgess. Co-written by critic Michel Ciment, the film examines the rise of youth rebellion in the 1960s, anti-authoritarianism, urban insecurity and the popularity of behavioural therapy.


Concert: Music for A Clockwork Orange

The UK premiere of Anthony Burgess’s music and songs for A Clockwork Orange, this will be a unique opportunity to experience Burgess’s music-hall ultraviolence. Includes a performance of a new piece by Kevin Malone, A Clockwork Operetta, commissioned by the Burgess Foundation

Jonathon Green has been described as the greatest British lexicographer since Dr Johnson. His many books include the monumental Green’s Dictionary of Slang, Cassell’s Dictionary of Insulting Quotations, and Getting Off at Gateshead: An A–Z of Filth. Join us for a horrorshow talk and discussion on Anthony Burgess’s language, slang and obscenity in A Clockwork Orange.

After forty years of controversy, Stanley Kubrick’s now classic adaptation of Anthony Burgess’s novel returns in all its glory to the big screen. Set in a warped futuristic Britain, charismatic delinquent and sociopath Alex is jailed and volunteers for an experimental aversion therapy developed by the government in an effort to solve society’s crime problem… but not all goes to plan. This is an incredibly rare opportunity to revisit Burgess and Kubrick’s possibly prescient vision of a violent dystopian future.


Lecture: Peter Kramer - Is it some devil that crawls inside of you?

An acknowledged expert on the history of cinema, Peter Kramer has written extensively on silent films, Buster Keaton, Hollywood and the Germans, Audrey Hepburn, Disney, Steven Spielberg, and Stanley Kubrick. He is the author of the recent book-length study A Clockwork Orange – Controversies and will speak with his characteristic erudition and infectious enthusiasm on Burgess, Kubrick and youth culture.

Featuring a collection of stars from New York’s The Factory studio, Vinyl was Andy Warhol’s earlier and much less well known adaptation of Anthony Burgess’s A Clockwork Orange. A fascinating companion piece to Stanley Kubrick’s now legendary take on the novel, this is an ultra rare screening of this uncompromising and experimental 16mm work.
Full programme:
http://www.anthonyburgess.org/mediablog/fifty-years-of-a-clockwork-orange-full-programme?utm_source=AnthonyBurgessmailinglist&utm_campaign=68e382776b-Events_late_june&utm_medium=email

Speakers include Salford's Joe Darlington and Dr Benjamin Halligan
Posted by BLH at 15:47