Johnny Marr to be given honorary degree by Salford 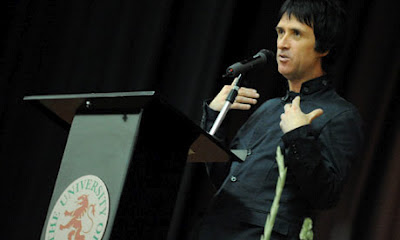 He found fame with legendary Manchester band The Smiths, and now Johnny Marr’s outstanding achievements in a music career spanning four decades have been recognised with the granting of an honorary Salford degree.
The influential guitarist and songwriter, whose distinctive sound has been credited with changing the face of British guitar music and inspiring a generation of indie bands across the world, will receive a doctorate of arts on Thursday 19 July as part of our graduation ceremonies.
Born in Ardwick in 1963, Marr taught himself the guitar at 11 and as a teenager started writing songs and playing in various bands in Manchester. At 17 he decided to form a band and approached Steven Morrissey from Stretford, a singer four years his senior and a well known figure around the Manchester punk scene.
The pair christened their new band The Smiths and a new chapter in pop music history began. From 1982 until 1987 The Smiths embarked on a career of unforgettable shows and record releases and, through Marr’s original and dazzling musicality and Morrissey’s unique outsider world view, they redefined British guitar pop.
After disbanding The Smiths, Marr started a prolific career as a co-writer and collaborator with a number of hugely significant groups and musicians such as Talking Heads, The The, Bryan Ferry, Beck and Electronic, as well as discovering new local talent Oasis. He has been cited as an influence by many more bands, including Blur, Radiohead and Manic Street Preachers.
In 2005 he joined Modest Mouse and achieved his first US number one album, before moving back to the UK in 2010 to join The Cribs for their first UK top ten LP Ignore The Ignorant. In 2011 Marr scored his first film soundtrack called The Big Bang, and then recorded the soundtrack to the film Inception with legendary composer Hans Zimmer.
He joined Salford in 2007 as a visiting professor in popular music. His regular masterclasses have helped to inspire a new generation of musicians joining a long line of successful bands to have studied at the University.
Marr said: “I’m very pleased to be given an honorary degree by Salford University. I've enjoyed working with the students in my capacity as visiting professor and hopefully we can find some more opportunities for creative work in the future.”
Posted by BLH at 08:18