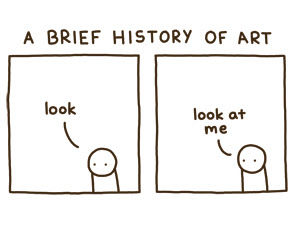 
McClymont makes his own ‘science machines’ with beguiling outcomes: like a raindrop that never falls.


Through in depth paint analyses of houses, bridges and more, Baty digs up surprising stories of architecture and the past.


The daughter of a psychoanalyst, Howie takes on the Roger Ballen’s controversial black and white photography, with a focus on his pictures of Plattelanders, the socially and economically marginalized descendants of Dutch settlers in South Africa, and gives us a madness to be felt.


A ‘strange gourmet’, Cahill sets the table with wildlife cinema, the food chain, and dissident Surrealism


Through photographs, film and paint, Teichmann erotically travels inside caves, storms, grottoes, women and seashells, like a phenomenologist inside a waking dream.


In 1956, 'Operation Switch' opened up the world's first atomic power station and gave birth to a new nuclear visual culture at once utopian and terrifying.


Pondering the empty bed shared by Colette and her lover, Connolly takes us through a tour of emptiness (including Mallarmé’s obsession with the blank page, Ying Chen's novel Ingratitude and Kay Pollak's film As it is in Heaven ). With the work of Edouard Glissantis at hand, Connolly looks at opaqueness as both the necessary outcome of diversity in a globalized world and the form of the blank space of creation.


In regards to his recent book, Viktor Wynd’s Cabinet of Wonders, the filmmaker John Waters comments: ‘An insanely delightful how-to guide on becoming a mentally ill, cheerily obsessive eccentric hoarder told with lunatic humor and absolute joy. Viktor Wynd is a sick orchid who seems like the perfect man to me.’

Also of special interest to AHVS


13-14 May: Malcolm Bull, Visiting Pilkington Professor, details to be announced.


Malcolm Bull has been University Lecturer in Fine Art at The Ruskin School of Art, University of Oxford since 1992. His most recent books are Anti-Nietzsche (Verso, 2011); The Mirror of the Gods (OUP/Penguin, 2005), and Seeing Things Hidden (Verso, 2000). He has research interests in both art history and social and political theory.


Cornelia Parker is a sculptor and installation artist. She will be exhibiting her work for the reopening of the Whitworth. When Parker had the British Army blow up a garden shed and then suspended the resulting fragments from the ceiling, for Cold Dark Matter: An Exploded View, she touched on the fragility of experience and reconstructed memory. For The Maybe, made in collaboration with Tilda Swinton, she focused on the aura of objects owned by the famous, like Queen Victoria's stockings, which were collected and placed within museum vitrines. Even Swinton herself was shown as an object on display in her own glass case. Psychoanalysis's sexual turn was teased out when Parker made her own Rorschach blots out of sex videos dissolved in solvent for The Pornographic Drawings.

For further information: camilla.rostvik@postgrad.manchester.ac.uk
Posted by BLH at 18:29