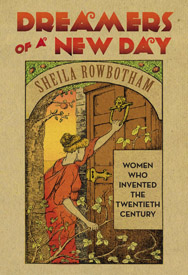 We are pleased to announce that socialist feminist writer and activist Sheila Rowbotham will give the third annual Frow lecture, which is entitled 'Dreamers of a new day: British and American women's alternative economic visions in the late 19th and early 20th centuries'.

Sheila Rowbotham draws on her most recent book, 'Dreamers of a new day: women who Invented the twentieth century' to show the range of ideas and plans women devised for a better society. While some have entered our daily lives many are yet to be realised and are still relevant today

Sheila Rowbotham is the Eccles British Library in Residence and an Honorary Fellow at the Universities of Manchester and Bristol.
2pm, all welcome, admission free.
Posted by BLH at 19:45