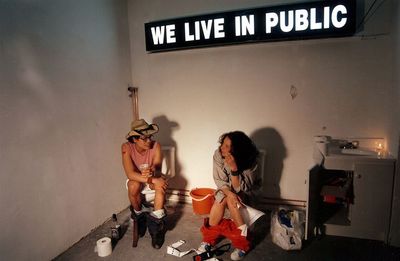 "We Live in Public" is the story of the internets revolutionary impact on human interaction as told through the eyes of internet pioneer and visionary, Josh Harris.

Though once considered the godfather of the downtown Internet scene in NYC in the 90s, known far and wide for his outrageous parties, innovations in chat, streaming audio and the creation of the first online television network, Harris is but a footnote in history at this point all because he took his experiments with the Internet and media consumption too far.

Director Ondi Timoner focuses on the legendary, million-dollar millennium party 'Quiet', an experiment in voluntary submission to mass surveillance. The party, which took place at an abandoned loft-manufacturing building on lower Broadway, featured over 90 Japanese-hotel-style pods where artists lived, played, worked, and celebrated.

This was followed by Harris's submission of his own life, and new relationship to constant surveillance, whose disturbing results are like a pre-history of our current Web 2.0/Reality TV era.

The films starts at 7.45 and will be followed by discussion.

Entry to film £3 or £2 for unwaged, low waged, students or OAPs.

Trailer: http://www.youtube.com/watch?v=_XSTwfdFwIY
Posted by BLH at 14:32