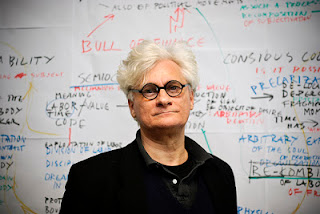 ** Article by Salford's Dr Michael Goddard ("Cinematic and aesthetic cartographies of subjective mutation"), concerning the work of Bifo, who delivered a talk at Salford in 2010. Journal can be downloaded for free, but only for a month.


New issue of the journal Subjectivity on the work of autonomist media theorist Franco ‘Bifo’ Berardi. The issue is freely available for the rest of March.


Subjectivity Volume 5 Issue 1 (April 2012)
Special Issue: Collective Becomings
Edited by Stevphen Shukaitis & Joanna Figiel
http://www.palgrave-journals.com/sub/journal/v5/n1/index.html
Franco ‘Bifo’ Berardi is a contemporary writer, autonomist theorist and media activist. He founded the magazine A/traverso (1975-1981), and was part of the staff of Radio Alice, the first pirate radio station in Italy (1976-1978). His work analyzes the role of media and information technology in post-industrial capitalism, in particular drawing from schizoanalysis and aesthetics to investigate processes of subjectification within precarious labor.

This issue of Subjectivity, which is the first major engagement with Bifo’s work in English, focuses on the themes of collective becomings, whether manifest in the eruption of new political movements, within the workings of the economy, or in the artistic sphere. It is not just a collection of essays that take Bifo’s ideas as their starting point, but rather a collection of essays that all start from the conjuncture of Bifo’s ideas, the issues and conditions raised by them, with forms of collective becomings in the present.

The purpose then is not to consider Bifo’s work in isolation, but rather to develop it as a tool, one that is explored through continued usage and application. This conjunctive approach is the most productive and valuable feature of Bifo’s writing, and autonomist analysis more generally: its ability to act as a kind of crossroads for bringing together different forms of political analysis and social theory, to act as a bridge between them.
Posted by BLH at 13:57