http://hub.salford.ac.uk/phoebemoore/2012/11/07/my-new-paperback/
Endorsements:
‘Phoebe Moore makes a fresh and important contribution to the study of global political economic struggles, deploying an analysis of South Korean labour in relation to capitalist development and globalisation, hegemony and passive revolution. This is agency-centred critical International Political Economy at its best, addressing one of the great labour struggles of our time’ Barry Gills, Professor of Global Politics, Newcastle University.

‘In this empirically rich and conceptually innovative book, Phoebe Moore convincingly demonstrates that neo-liberal restructuring in South Korea had not been a hegemonic process, but was constantly contested by workers shaping the outcome. I strongly recommend this book to everyone interested in neo-liberal globalisation and the possibilities of resistance to it’ Andreas Bieler, Professor of Political Economy, University of Nottingham.

‘Phoebe Moore has produced a rich and engaging study of South Korean political economy, which deserves to be read widely. It acts as a useful stimulus towards continued exploration of the social relations and political struggles which underpin and shape contemporary development processes’ Nicola Phillips, Professor in Political Economy, University of Sheffield. 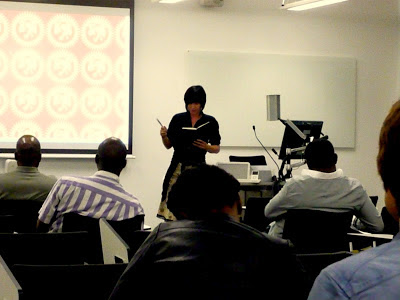 Phoebe, speaking at our MediaCityUK Postgraduate Conference, this Summer: