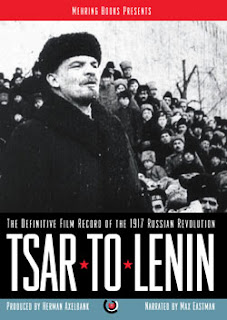 — FROM THE MASS UPRISING WHICH OVERTHREW TSARISM, TO THE
BOLSHEVIK-LED OCTOBER INSURRECTION WHICH ESTABLISHED THE FIRST
WORKERS' STATE, AND THE FINAL VICTORY OVER COUNTER-REVOLUTION
IN 1921.
IN A NEW PERIOD OF GLOBAL CAPITALIST CRISIS, TSAR TO LENIN BEARS WITNESS
TO A MOMENT IN HISTORY WHEN SOCIALIST IDEALS INSPIRED THE
GREATEST REVOLUTIONARY MOVEMENT IN WORLD HISTORY.

It presents an extraordinary cinematic account of the Russian
Revolution—from the mass uprising which overthrew the centuries-old
Tsarist regime in February 1917, to the Bolshevik-led insurrection eight
months later that established the first socialist workers’ state, and the
final victory in 1921 of the new Soviet regime over counterrevolutionary
forces after a three-year-long civil war.

Based on archival footage assembled over more than a decade by the
legendary Herman Axelbank (1900-1979), Tsar to Lenin provides an
unparalleled film record of a revolutionary movement, embracing
millions, which “shook the world” and changed the course of history.

The narration by Max Eastman (1883-1969), the pioneer American
radical, conveys with emotion and humanity the drama and pathos of
the revolution. Hailed by film critics as a masterpiece upon its premier,
Tsar to Lenin aroused fierce opposition from those who feared the
consequences of its truthful portrayal of events.

First, the Stalinist organisations—which could not abide the
documentary’s depiction of the leading role played by Leon Trotsky in
the revolution and civil war—threatened a boycott of theatres that
showed the film. Later, during the McCarthyite era and the Cold War,
public showings of Tsar to Lenin were all but impossible. Seventy-five
years after its premier, the importance of Tsar to Lenin remains
undiminished. Indeed, the fresh wave of historical falsification
provoked by the dissolution of the Soviet Union in 1991 lends to this
film exceptional relevance.

In a new period of global capitalist crisis, Tsar to Lenin bears witness
to a moment in history when socialist ideals inspired the greatest
revolutionary movement in world history.

For more information, including reviews visit: TSARTOLENIN.COM
Posted by BLH at 13:22