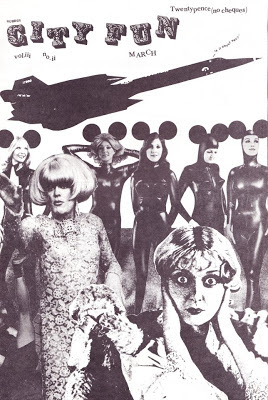 Included in the pages of 'City Fun' is an article credited to Burt
Macho which has now been established as the work of Morrissey; now
unmasked for the first time...

The 'City Fun' fanzine was published between 1978 and 1984 and is a
remarkable eye-witness account of one of the most fertile periods in
Manchester's music history; in its pages you get the unfolding
insider story of the rise of Joy Division, the death of Ian Curtis,
the beginnings of the Smiths, and the launch of the Hacienda plus a
unique insight into the city's independent labels, long-lost venues
and half-forgotten bands.

'City Fun' was one of many fanzines of the era; home-made, and
cheaply but passionately produced magazines aimed at lovers of
non-mainstream music, and sold by hand at gigs and in record shops.

Many contributors have since found fame, among them the artist Linder
Sterling. Researchers working on this 'City Fun' online archive have
also established that an article about Sandie Shaw by "Burt Macho"
was a contribution by none other than Morrissey.

Morrissey was a reader and a fan of 'City Fun' but he chose to write
in the fanzine under the pseudonym "Burt Macho".  It was just as the
Smiths were taking off; the same issue carries an advert for the
first Smiths single. John Peel said it was most important fanzine of
its time, and certainly nothing will give you greater insight into
the ideas and history of post-punk Manchester. It’s all in 'City Fun'.

The 'City Fun' online exhibition is part of Manchester Histories
Festival's ongoing celebration and investigation of Manchester's
fanzines. Festival Director Claire Turner; "This online exhibition
creates a permanent record of an era of alternative music in
Manchester that's now become internationally famous. The archive is a
source of information to historians and a source of inspiration for
subsequent generations."

The online exhibition of the 'City Fun' archive can be found here;