Welcome to the inaugural newsletter of Communication, Cultural and Media studies researchers at Salford. The last year has been a vibrant and highly successful one for CCMers who have been really active at home and internationally across a wide range of fronts. Read on…..

The year has already been marked by the release of a wealth of major international research outputs from CCM members in print and audiovisual form. Published in late 2013, Michael Goddard’s Impossible Cartographies: The Cinema of Raúl Ruiz (London/New York: Wallflower Press/Columbia) looks set to become a leading work in the field. Reviews of George McKay’s latest book Shakin’ All Over: Popular Music and Disability (Univ Michigan Press) have declared it ‘a first for the field’ (Times Higher Education) and an ‘astonishing work….that will inspire and entertain audiences for years to come’ (Popular Music & Society). Erik Knudsen’s latest film The Raven on the Jetty won the Jury Prize at the 2014 Madrid International Film Festival (see: http://www.onedayfilms.com/raven-jetty-wins-jury-award-madrid-international-film-festival/) and looks set for wider acclaim.

A longer list of our publications in no particular order is as follows:


Coen, Sharon and Jones, C. (2014) A matter of Law and Order: reporting the Salford riots in local webpages. Invited paper for Special issue on Social Sciences and Social Movements, in Contemporary Social Sciences 9 (1) 1-16.


Simpson, Seamus (2014)‘ Next Generation Network environments in Europe: the significance of the EU as a policy actor’, Government Information Quarterly, 31(1), 100-07.


Knudsen, Erik (2014) Eyes and Narrative Perspective On Story: A Practice Led Exploration of the Use of Eyes and Eye-lines in Fiction Film. Journal of Media Practice (Vol. 15 No. 1):


Fairclough Issacs, Kirsty (2013) ‘Nothing less than perfect: female celebrity, ageing and hyper-scrutiny in the gossip industry’, in: Female Celebrity and Ageing Back in the Spotlight, Routledge, London, UK.


Seamus Simpson recently co-edited (with Katharine Sarikakis, University of Vienna) a special issue of the International Journal of Media and Cultural Politics on Imposing Freedoms: New Defaults in Media and Communications Governance. This special issue emerged from a joint effort to draw together work from communication law and policy experts aired in 2012 at the conferences of the largest media and communication academic associations: ECREA, IAMCR and ICA. The 2012 conference questioned normative assumptions about the constitution of freedom through media policy and media governance. Andy Willis co-edited with Sarah Perks a special edition of Film International on ‘My Noir’ where a wide range of artists, filmmakers and critics reflected on the idea of film noir. Seamus Simpson also edited a special issue of the Journal of Information Policy on Contemporary Issues in European Media Policy. This special issue is a product of the 2013 workshop of the ECREA Communication Law and Policy section which took place at MediacityUK, 25-26 October.


Michael Goddard along with Adriana Amaral and a team of researchers at Unisinos, a leading University in Brazil, was awarded funding of over £60,000 to become Special Visiting Researcher in Brazil form 2014-2016. The award was accepted by CAPES (Coordenação de Aperfeiçoamento de Pessoal de Nível Superior), and is funded through the Science without Borders scheme, a Brazilian Government scholarship programme. Michael Goddard is undertaking a project which researches music scenes in Manchester and Porto Alegre in relation to popular music studies, post-industrial cities, creative industries and social edia.

Whilst something of a departure from his recent, more local research into music, media and noise, the work will take forward earlier conducted collaborative research work with CCM's Dr Benjamin Halligan and others at the University Salford into popular music, media and noise since their first collaboration on the music of The Fall in 2008. In addition to research in Brazil, the project will involve return visits of several of the members of the Brazilian research team from Unisinos to Salford, as well as the organisation of international research events in both locations, publications and technical applications.

The project began in April 2014 and so far there has been a series of presentations of Michael’s research in Brazil, a postgraduate seminar at Salford, and initial meetings and discussion groups between the research group. There have also been several appearances in Brazilian media both in print and on TV, and work has begun to develop the project's website and mobile application in additions to the already existing blog and social media sites. The first academic publications related to the project, and first academic events, are anticipated for 2015.


Finally, George McKay secured £7270 from the AHRC to run the ‘Carnivalising the Creative Economy’ Showcase held in March 2014 in London. George organised a panel, a stand and funded a film on the subject of ‘AHRC Research on and with British Jazz Festivals’ at the event. This featured academics from Salford and Glasgow universities, a CDA student from Glasgow, as well the directors of London, Glasgow and Cheltenham Jazz Festivals. The 15-minute film, Carnivalising the Creative Economy, was directed by professional filmmaker, Gemma Thorpe.

CCMers Deliver Papers at a Wide Range of International Conferences


CCM staff have travelled far and wide this year to present the results of their research at high quality gatherings of international scholars. Papers have been presented across the UK, as well as the USA, Austria, Ireland, Finland and Holland. Some examples are:


In May 2014, Seamus Simpson co-organised (with Laura Stein, University of Austin, Texas) the Communication Law and Policy Division’s contribution to the International Communication Association annual conference, held this year in Seattle. A vibrant mix of papers was delivered by academics from across the world, alongside a lively ‘extended session’ debate on ‘communication law and policy and the good life’. The ICA conference is the largest annual gathering of academics in the field. There were 2700 attendees at the Seattle conference. Next year, ICA will be held in Puerto Rico. The call for papers is out now with a deadline of 4 November.


In June 2014, a host of leading researchers in cultural studies converged on Salford for the ‘Carnivalising Pop’ symposium organised by George McKay. Among others, Gina Arnold from Stanford University spoke on Race, Space, and Representation at American Rock Festivals. Anne Dvinge from the University of Copenhagen spoke on Musicking in Motor City: Reconfiguring urban space at the Detroit Jazz Festival. Our own Ben Halligan delivered a paper on ‘Skanky Shamanism: Sensual Audience Participation and the Miley Cyrus “Bangerz” Arena Tour’. Academics aside, Alan Lodge, veteran festivals photographer and travellers activist or led a Discussion and Showing of Some Key Photographs of Festivals, New Travellers and Alternative Culture in Britain Since the 1970s.


This year’s Festival has three component parts: The Challenging Media Landscapes conference; The 21st Nations and Regions Media Conference and Next Gen. CCMers make up the Programme Committee for the CML conference, running over 17th and 18th November. The conference promises to be an international event with paper givers lined up from universities in the UK, USA, Australia, Norway, Finland, France, the Ukraine, Nigeria, Ireland, and Canada among others.


Seamus Simpson is Content Director for NARM 2014, the centrepiece of the Festival. The conference this year features keynote addresses from Harriet Harman, Ed Vaizey and Peter Fincham as well as a diverse range of panels in which leading media industry professionals will speak on topics such as the future of the UK licence fee, new digital technologies, the radio business, diversity in the media sector, the internationalisation of media formats and the future of commissioning in the UK.

In July 2014, Garry Crawford delivered a keynote lecture at the 2014 Leisure Studies Association conference in Glasgow. The event was hosted by University of the West of Scotland, Paisley Campus. LSA 2014, Sport, Festivity and Digital Cultures, brought together comparative and contrasting perspectives upon both the digital age in leisure and upon digital practices as leisure - as prevalent in cultural forms, such as sport or festivity and other leisure pursuits. The conference occurred in a particularly important year for both Scotland and the global sporting and cultural communities.

In March, Erik Knudsen delivered a keynote address on The Meaning of Independence: Challenges and Opportunities for Ghanaian Film in an Age of Abundance at the Legon International Film Event, University of Ghana, Accra, Ghana. HE also gave a keynote address in June at the Journal of Media Practice Symposium, Roehampton University, London.

Spring 2014 was a busy period for CCMers. Kirsty Fairclough lectured on gender and stand up comedy at Columbia College Chicago. Andy Willis led a one hour introduction as part of Viva Spanish and Latin American Film Festival at Manchester Cornerhouse. David Kreps was invited speaker at Camp Digital held at Manchester Museum of Science and Industry. Sharon Coen gave a talk on Empowering citizens: media, identity and engagement at the Media Research Seminar Series at Aberystwyth University. Andy Willis co-ordinated a screening and led Q&A with director Andrew Leavold of the film The Search for Weng Weng at Cornerhouse, 5th June. He did a Q&A with director Ken Loach at the preview of his latest film Jimmy’s Hall at Cornerhouse May 29th.


CCMers Bring Forward the Next Generation of Academic Talent


This year has seen a significant number of PhD completions in CCM. The growing number of successful candidates, making contributions to knowledge in a diverse range of fields, is testament to the quality of supervision received and the growing reputation of Salford as a place to undertake internationally outstanding media research. Congratulations to: 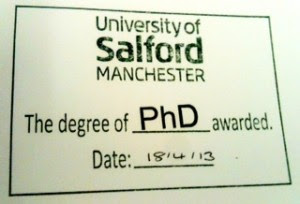 Abdullah alMaghlooth (2014) The Relevance of Gatekeeping in the Process of Contemporary News Creation and Circulation in Saudi Arabia. Supervisor: Carole O’Reilly

Greg Bevan (2014) Voice, Language and Texture: The Myth of Objectivity and the Renegotiation of Documentary Aesthetics. Supervisor: Erik Knudsen